(EDITOR’S NOTE: John Willard was somewhere between Davenport and “Tuxedo Junction” when he wrote this history on life with the Glenn Miller Orchestra – the greatest of all the Big Bands.  By comparison, the Miller band of the 1940’s would be today’s Fleetwood Mac in popularity.  But the Big Band sound is coming back, and Willard is “In the Mood” as he rolls along in the “Chattanooga Choo Choo.”

ON THE ROAD WITH THE GLENN MILLER ORCHESTRA – “It’s rough back there in the ghetto, but the view isn’t bad.  You can keep tabs on all the activity.”

Tom Lundberg, 25, a bass trombonist with the Glenn Miller Orchestra, wasn’t describing his old neighborhood.  He was talking about the rear section of the “Chattanooga Choo Choo,” the bus in which the band travels to gigs.

The back of the musician’s home on wheels is known as the ghetto because it is considered the most undesirable place to live. Since you sit directly above the wheels and diesel engine, the ride can tend to be a bone-jostling experience.

Most members prefer “midtown”, the center section of the bus. The ride is smoother.  It is also easier to crawl into your seat when the isle is blocked by the outstretched legs of sleeping band members.

There are several levels of skill in moving down the aisle of the crowded bus.  Sometimes, the coach is so crammed with prone bodies that bandsmen crawl monkey-style along the package shelf.  The package shelf is the “Olympic Games” of traveling from one end of the bus to the other.

Those who move by clambering over the seat backs use the “men’s tees.”  The armrests, the easiest route, are classified as the “ladies’ tees.”

Many say the best section of the “Chattanooga Choo Choo” is “uptown” or the front of the bus.  Residents of this executive enclave include Larry O’Brien, orchestra director, and Richard “Zoot” Gearhart, road manager and saxophone section leader.  Vocalist Colleen Miller, the band’s only female member, calls “uptown” home as does Al Patacca, lead trumpet player.

UPTOWN RESIDENTS also have a stunning panorama of the road since they are close to the bus’s windshield.  In the other neighborhoods, windows tend to be obscured by cables festooned with clothing, stationary, pens, clipboards, cassette tape decks, water bottles, boxes of tissue and other necessities of life.

Seats generally are assigned on a seniority basis.  Musicians put in their bids as soon as they hear somebody is quitting.  When pianist Bob Dogan left the band after the gig at Northwestern University in Evanston, Ill, a musician from the ghetto moved up to Dogan’s midtown seat.

The move opened up a ghetto seat for this reporter, who was delighted to have a spot at all for the long haul to a concert in Hastings, Minn.  After we pulled out of Evanston, lead trombonist Brian Deering helped me find the best sleeping position after coming up with several extra pillows. 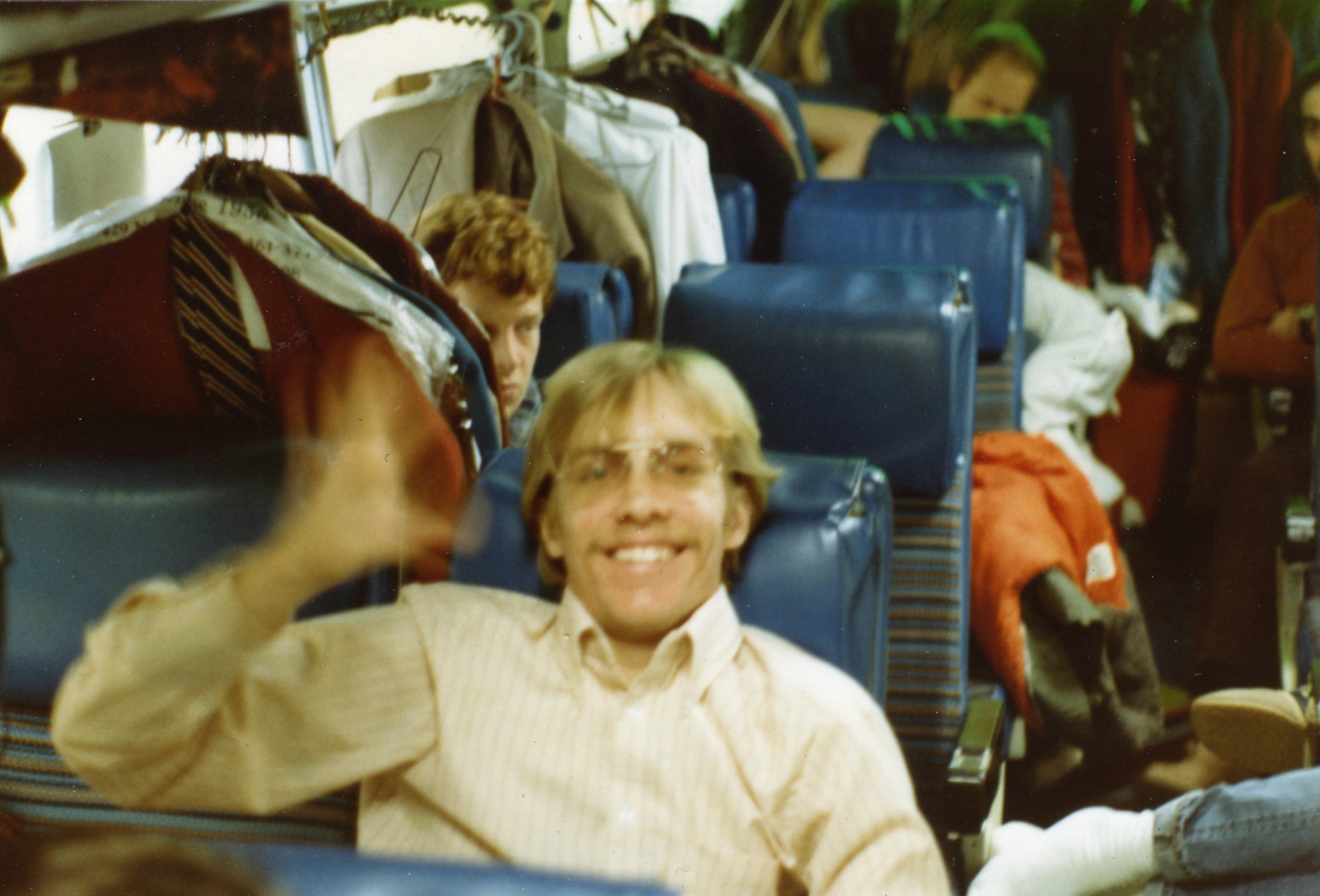 Trumpet player Larry Newman lives in “midtown.”  Directly behind him is Bruce Harrington.  Back in the “ghetto” – next to the coat racks – are Jim Anthony and Al Patacca.

“I’VE GOT MY OWN sleeping system down to a science.  I use seven pillows, ” Deering said.

Deering is no stranger  to the road life.  He toured with Buddy Morrow’s Tommy Dorsey Orchestra for 15 months before joining The Glenn Miller Orchestra six months ago.

Even with Deering’s assistance, I feel like a contortionist in a circus, but sleep finally came.  A cold Coors offered by vocalist Gary Martin helped me relax.

Although the bus doesn’t have the compartments of a Pullman car, each seat remains the private preserve of the occupant.  While visiting someone at his seat, you feel like you are in a home.  Personal photographs pasted overhead, books and cassette libraries all add individuality to each band member’s assigned pair of seats.

“Would you like to watch some TV?”, said Tom Lundberg, adjusting the tiny battery-powered Panasonic television resting on a foam rubber pad across his legs.  Lundberg extended the invitation shortly after we left Davenport for the gig at Northwestern.  We were on Illinois 5 between Davenport and DeKalb, Ill, and the Georgia State University music graduate looked relaxed in his Georgia Bulldogs hat. 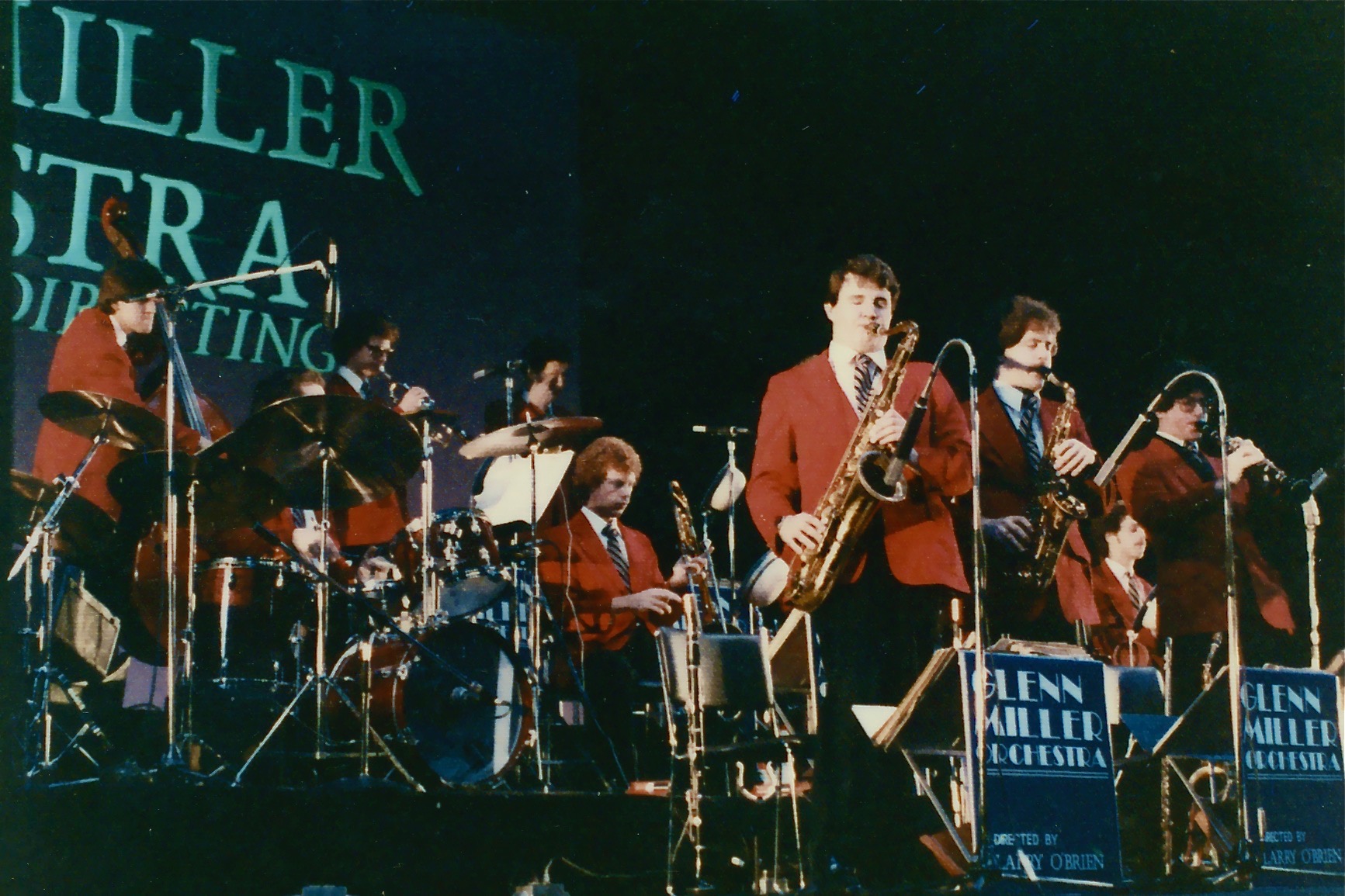 NURSING A COORS fetched from the cooler under his seat, Lundberg alternated channels between the World Series baseball playoffs and the Indiana-Iowa football game.

The reception on the tiny set, which Lundberg bought in Japan during the band’s last tour, was surprisingly good.

“How about some music,” said Lundberg, handing me a headset attached to a  cassette tape player.

My ears were filled with the pulsing sounds of trombonist J.J. Johnson, one of Lundberg’s idols.

SUCH CREATURE comforts are important for an organization that travels more than 70,000 miles annually and is on the bandstand at least 300 nights a year.

When they are not performing, members of the Glenn Miller band unwind in a variety of activities ranging from chess and video games to mountain climbing.

In a rare day off in Colorado, Anthony braved hail storms to climb 7,400 feet up Pikes Peak.  Anthony recorded the climb with his 35mm camera and assorted lenses.

A chance for travel is one of the main reasons young musicians join the Glenn Miller Orchestra.  Most are single and can put up with the extended road trips.  But a few, like bassist Tim Powell, 23, are married.  As the “Chattanooga Choo Choo” sped toward Evanston, Powell noted that it was exactly a year ago to the day that he met his wife, Janet Kubancik.  They were married last January.

When Powell arrived at the Clayton House, where the band stayed for its Col Ballroom gig, he found an anniversary package sent by Janet.  The gifts were a Sherlock Holmes book and a cassette tape.

When Tim and Janet tied the knot, he told her she could expect long separations.  “You need an understanding partner in this business,” he said.

Another married man aboard the bus is road manager Dick Gearhart, 53, Lancaster, Pa.  Gerhart joined the Glenn Miller Orchestra in 1968 and he has been the road manager since 1974.

Before landing his job with the band, Gerhart was working days at his office supply business and playing sax at night.  “This is a steady job.  Musicians can’t find too many steady jobs these days, “ said Gerhart, explaining why he has stayed with the band so long.  Gerhart often brings his wife on tours.

THE BAND’S CURRENT road trip has been tough on Al Patacca.  The band’s 49-year-old lead trumpet player came on board in order to add maturity to the brass section.  His electrifying solo on “American Patrol” reflects his musical roots in Baltimore strip joints, where he had to play extra loud so the girls could feel the music as they did their bumps and grinds.

Patacca, married and the father of two teen-age children, has played with such jazz luminaries as Harry James, Buddy Rich, Don Ellis and Louis Bellson.  His tour with the Glenn Miller Orchestra was his first road trip in 12 years.

“It’s rough to be away from the family, but I’m happy to have a job, “ Patacca said.