(EDITOR’S NOTE: It was a “Sentimental Journey.”   The Quad-City Times put John Willard on the road for a series of one-nighters with the most famous big band of all  – the Glenn Miller Orchestra.  Here is the last in a three-part series.)

ON THE ROAD WITH THE GLENN MILLER ORCHESTRA . . . HASTINGS, Minn. –  As the blue and silver motor coach lurches down the maple-lined streets of this old Mississippi River town, bleary-eyed members of the Glenn Miller Orchestra shake themselves out of sleep.

“This must be the place, “ a voice on the bus says.  It’s 11 a.m. Sunday, and the Glenn Miller Orchestra  has arrived for a two-hour concert that night at Hastings Senior High School.  After an all-night, 400-mile journey from Evanston, Ill, the 19 musicians are anxious to settle in their rooms at the Hastings Inn.

They’re looking forward to stretching out on a real bed, doing laundry, cleaning up, shaving and finishing letters.  Writing on a a bouncing bus is difficult.

But dreams of a hot shower and clean bed are suddenly shelved.

“The rooms aren’t ready yet,” road manager Dick Gerhart reports after returning from the motel office.  “We’ll get the bus driver settled first.  The other rooms should open up pretty soon.”

TRAVELING WITH THE Glenn Miller Orchestra is like being on military maneuvers.  There are long waits and logistic problems, navigation problems and pogo stick schedules.

Earlier this month, the band played in Sioux City, Iowa.  From Sioux City, the band traveled to Milwaukee.  Then they went back to Iowa for the Davenport gig.

After Davenport, the band made an about face to Evanston before returning west again for gigs in Minnesota, the Dakotas and Nebraska. 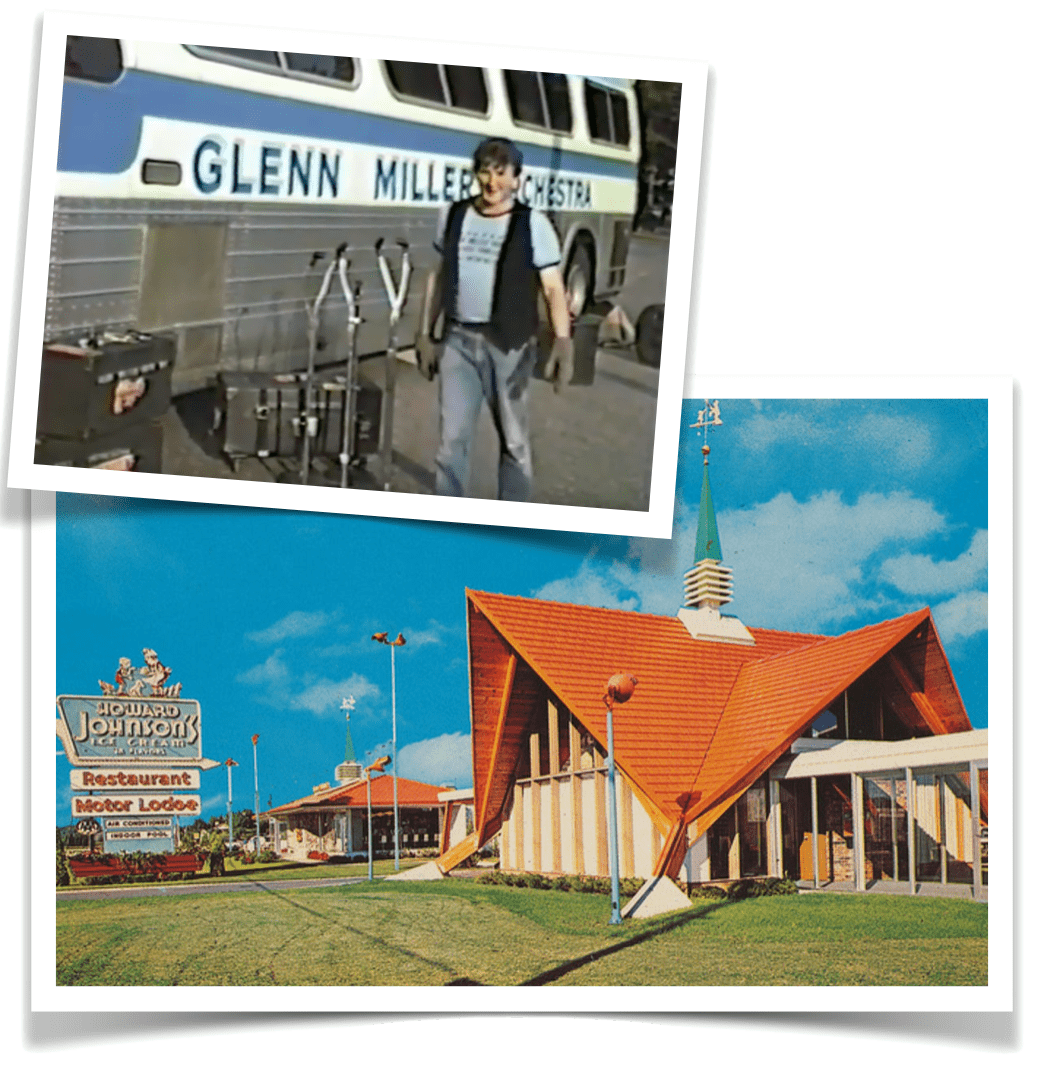 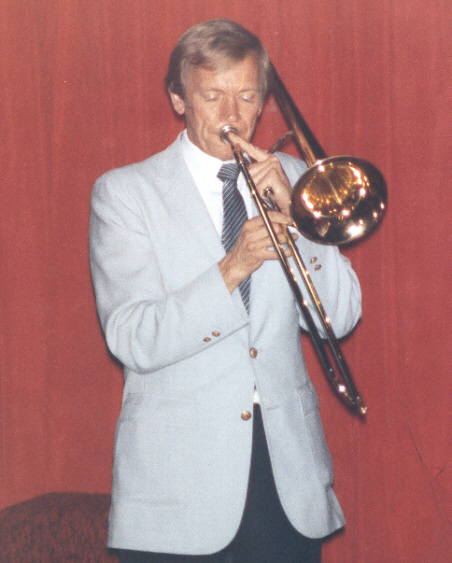 “The hardest part of my job is getting the band up for each concert.  We  play the same tunes day after day.  We have to sound fresh – like we’re playing them for the first time,” O’Brien said.

O’Brien has strict rules for the band.  Smoking on the bus is prohibited.  Use of drugs is cause for immediate dismissal as is drinking on stage during a performance.  Any guest in a band member’s motel room must be registered.

The rules are not unlike those of the original Glenn Miller Orchestra.  Miller has a  strict disciplinarian whose regulations bugged many of his musicians.

O’Brien watched over his charges like an attentive coach as they set up for their concert at Hastings Senior High School.  The band always arrives at a gig two hours in advance.  This allows 45 minutes to set up, about an hour for sound checks and time for the audience to assemble.

Musicians can earn extra money by working as sound men, set-up men or singer with the orchestra’s vocal quartet, “The Moonlight Serenaders.”

Keeping the musicians motivated is the responsibility of Larry O’Brien, 49, director of the Glenn Miller Orchestra.

With his sandy hair and youthful face, O’Brien looks more like a college basketball coach than a bandleader.  In fact, he keeps trim by jogging three miles a day.

Soon, vocalist Gary Martin, the band’s sound man, was busy untangling a nest of microphones and positioning them in front of music stands. 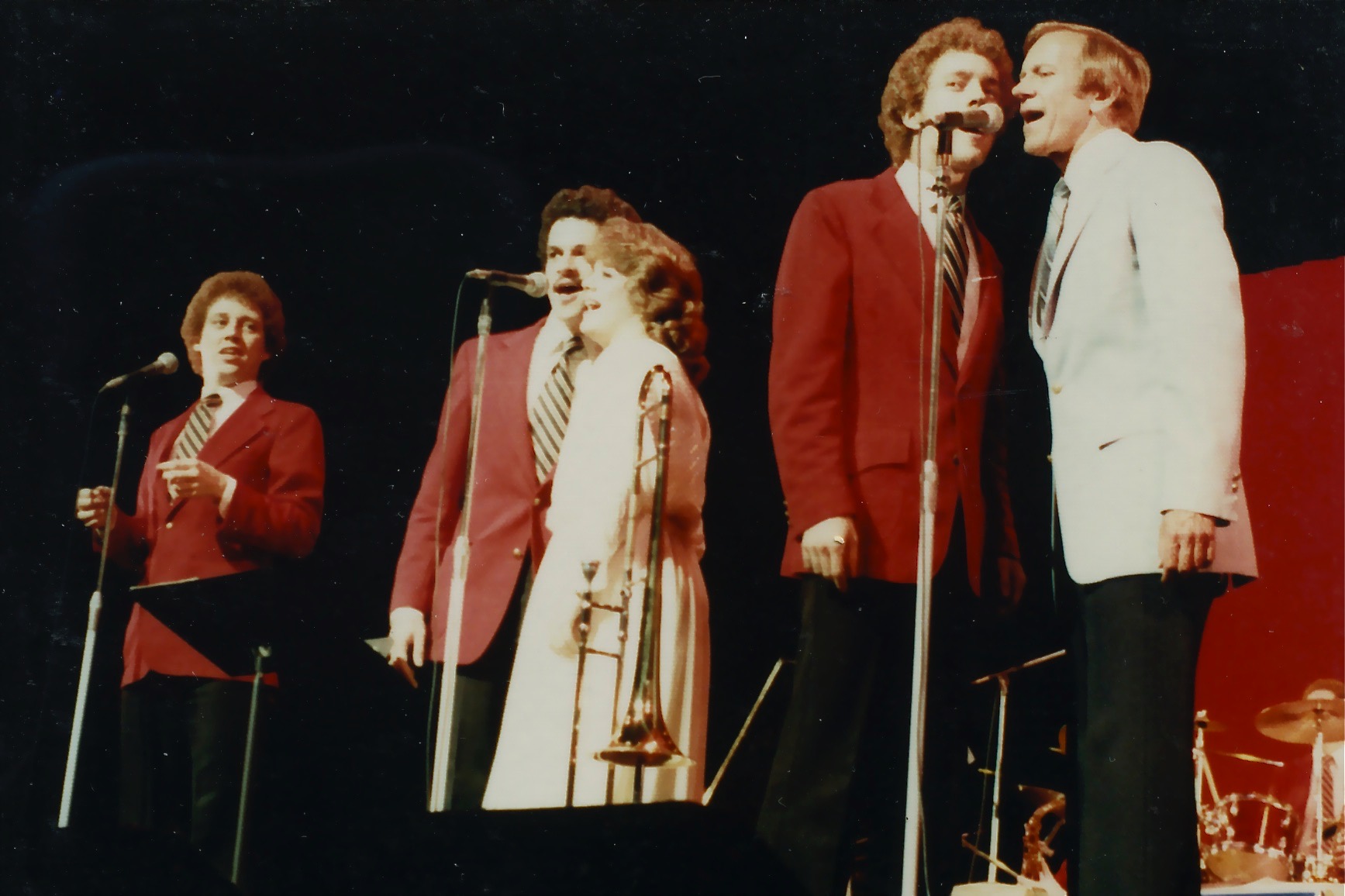 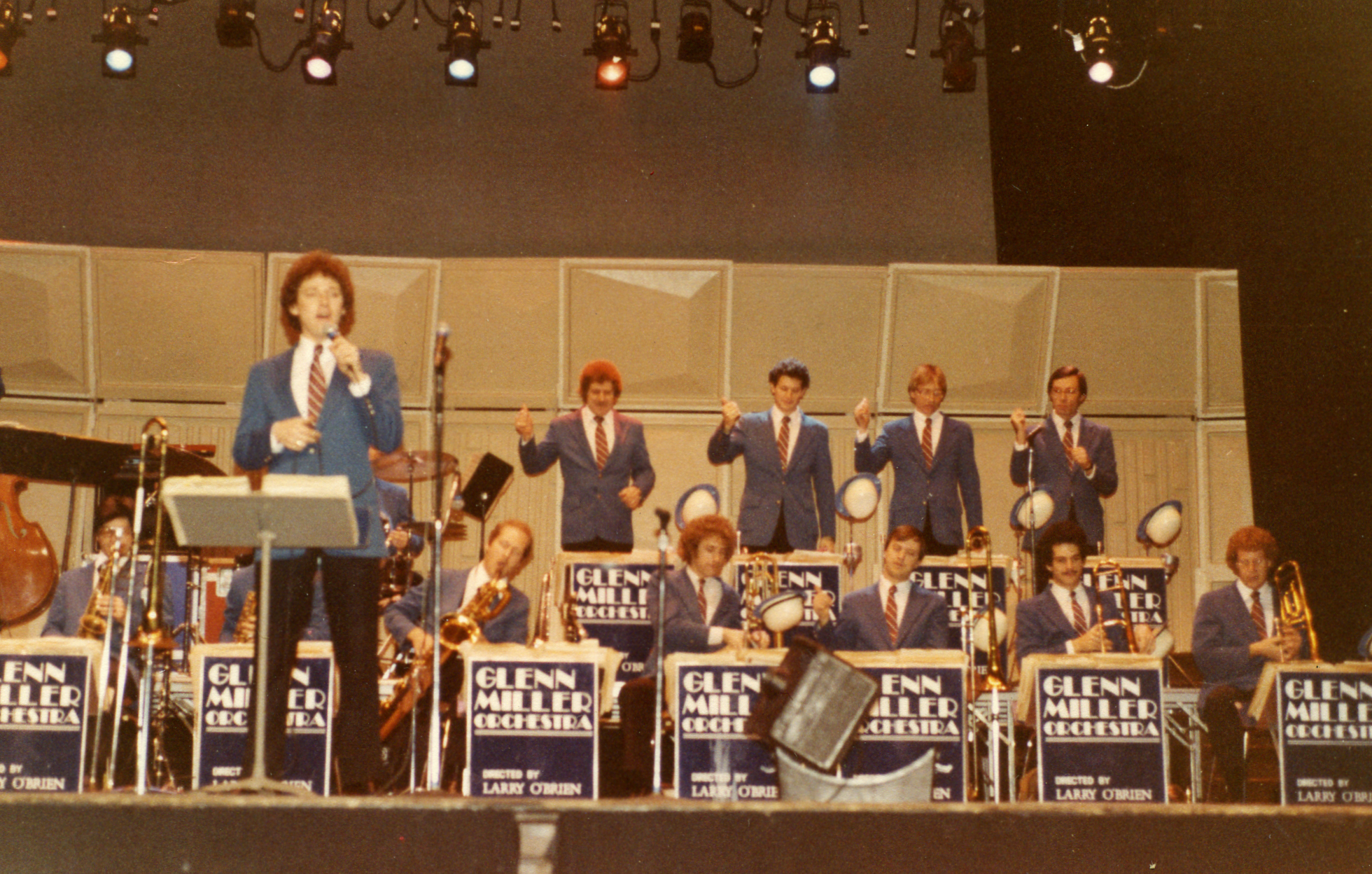 “Check This!  Check This!” he chanted into each mike.

Martin is ideally suited for his role as sound man.  Since he doesn’t play an instrument, he is free to wander about the hall and check sound levels during a performance.

As Martin made his sound checks, road manager Gerhart stood in the middle of the six-year-old auditorium and smiled.

“What a great room.  The acoustics are unbelievable,” he said.

Gerhart summoned the musicians to the stage.

With Colleen Miller doing the vocals, they played the opening bars to “Tangerine.”  Gerhart scowled.

“It sounds very hot.  The saxes are out of tune,” he said.

“It feels like there’s a struggle going on,” Miss Miller added.

MARTIN CONTINUED twisting dials on his console until the proper volume was achieved.  Members of the orchestra went back to the bus to change.  But before they left, Gerhart had a bit of advice.

“Fellows, when you come out on stage, try to look like you are business men going to a meeting, not a bunch of wandering minstrels.  And after you’re finished, don’t come bak out to tear down until the house has emptied.”

A concert offers different challenges to the Glenn Miller Orchestra.  “At a dance, people can go to the bar, talk or go out for fresh air.  At a concert, we are the focal point,” O’Brien said.

After two consecutive four-hour dance dates, the Hastings concert was a breather of sorts for the Glenn Miller Orchestra.  The concert attracted a sell-out crowd.  But the audience seemed reserved, even stiff, as the band went through its repertoire of memorable tunes.

The scene was a contrast from the band’s rousing gig at Northwestern University the night before.  Band members were afraid homecoming revelers would dance right into the bandstand.

The Glenn Miller Orchestra closed its Hastings performance with “Moonlight Serenade,” its traditional opening and closing number. As the musicians cased their instruments, an attractive blond strode to the front of the stage.  She was Cheri Thorne, a singer from nearby St. Paul, who had shown up to audition for the band.

The Glenn Miller Orchestra holds auditions while it is on the road.  In Evanston, a young trombonist tried out for the band and was placed on the list of job hopefuls.

Now it was Ms. Thorne’s turn.  Accompanied by the band’s new pianist, Bill Rasey, Ms. Thorne sang “Over the Rainbow.”  O’Brien and Gerhart listened intently and thanked her for her interest. She, too, was put on the list of job hopefuls.

Ms. Thorne explained to a reporter why she wanted to join the band.  “I have 18 years experience singing with big bands, and the Glenn Miller Band is one of the best.  It has a magic name.”

She then left the hushed auditorium, hoping to find that magic over her own rainbow.